Collaborative gaming as fun Hackathon project
Published on July 17, 2017 under the tag haskell

This is a small write-up of a fun Haskell project that Andras Slemmer, Francesco Mazzoli and I worked on during ZuriHac 2017.

I work with Haskell professionally, and it can be hard to motivate myself to work on similar stuff during Hackathons. This year I also had a large part in organising the Hackathon, so there was little room to take on a serious project.

This is why I joined in the fun of of creating a deliberately silly thing during this Hackathon (aside from still trying to help people out as much as possible).

This year, we decided to implement something in the style of Twitch Plays Pokémon. Rather than picking a slow, turn-based game such as Pokémon, however, we wanted to try the same thing for a fast game, such as a platformer.

For the impatient, here is a quick preview:

Here is the video I actually meant to upload but twitter cropped. #zuriHac plays Mario pic.twitter.com/Ku76aH0OpN

The core design question of the project is how to handle keypresses and aggregate them when you have many concurrent users. Twitch Plays Pokémon solved this problem in two distinct modes:

With a majority vote, players could switch between the modes.

There are a bunch of reasons why this does not work great for faster games:

We solved this by putting a key voting algorithm in place to aggregate the key events from the users. We think our algorithm should work well with most games, if the parameters are tweaked a bit.

First, imagine that we are looking at every key independently. For a given key, we might receive the following input from users, where a block means that the key is pressed:

Every key press is expanded to match the sample interval first. This gives us something like:

We can aggregate them according to a treshold. This is another parameter that can be tweaked per game. In our example, we can set this treshold to 0.5. This means that 50% of users must be pressing a key before we consider it pressed. Concretely, for our 3 users, that means that at least two people must be pressing the key. This gives us the following aggregates:

After we’ve aggregated the key presses, we can send the result to the game. It’s important to note that this happens one sample interval after the actual user keypresses, since you are not easily able to make any conclusions before the interval has ended. This adds some latency but we didn’t find this a problem in practice for the games we tried.

Apart from that, we added to more complications to make the experience smoother:

That takes care of the key logic component, so now let’s look at the stack. 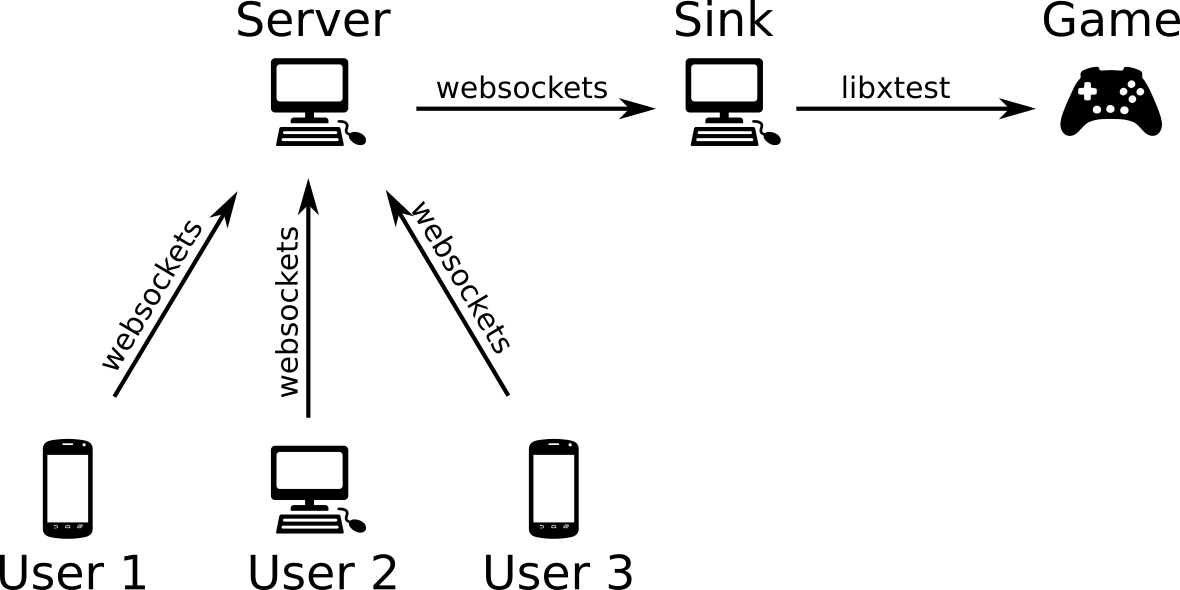 We played Super Mario World with around 60 people on local Wi-Fi. We required 40% of people to press a key for the voting, in 10ms sampling windows. The system performed very smoothly, although the same cannot be said about the collaboration between users.

Thanks for joining in the fun! The code for our project can be found here.