How good is Haskell's lazy sort actually?
Published on September 17, 2020 under the tag haskell

Haskell’s laziness allows you to do many cool things. I’ve talked about searching an infinite graph before. Another commonly mentioned example is finding the smallest N items in a list.

Because programmers are lazy as well, this is often defined as:

This happens regardless of the language of choice if we’re confident that the list will not be too large. It’s more important to be correct than it is to be fast.

However, in strict languages we’re really sorting the entire list before taking the first N items. We can implement this in Haskell by forcing the length of the sorted list.

If you’re at least somewhat familiar with the concept of laziness, you may intuitively realize that the lazy version of smallestN is much better since it’ll only sort as far as it needs.

But how much better does it actually do, with Haskell’s default sort?

For the sake of the comparison, we can introduce a third algorithm, which does a slightly smarter thing by keeping a heap of the smallest elements it has seen so far. This code is far more complex than smallestN_lazy, so if it performs better, we should still ask ourselves if the additional complexity is worth it.

So, we get to the main trick I wanted to talk about: how do we benchmark this, and can we add unit tests to confirm these benchmark results in CI? Benchmark execution times are very fickle. Instruction counting is awesome but perhaps a little overkill.

Instead, we can just count the number of comparisons.

smallestN has an Ord constraint, so if we want to count the number of comparisons we’ll want to do that for both == and compare.

The actual ticking code goes in tick2, which applies a binary operation and increases the counters of both arguments. We need unsafePerformIO for that but it’s fine since this lives only in our testing code and not our actual smallestN implementation.

Let’s add some benchmarking that prints an ad-hoc CSV:

Plug that CSV into a spreadsheet and we get this graph. What conclusions can we draw? 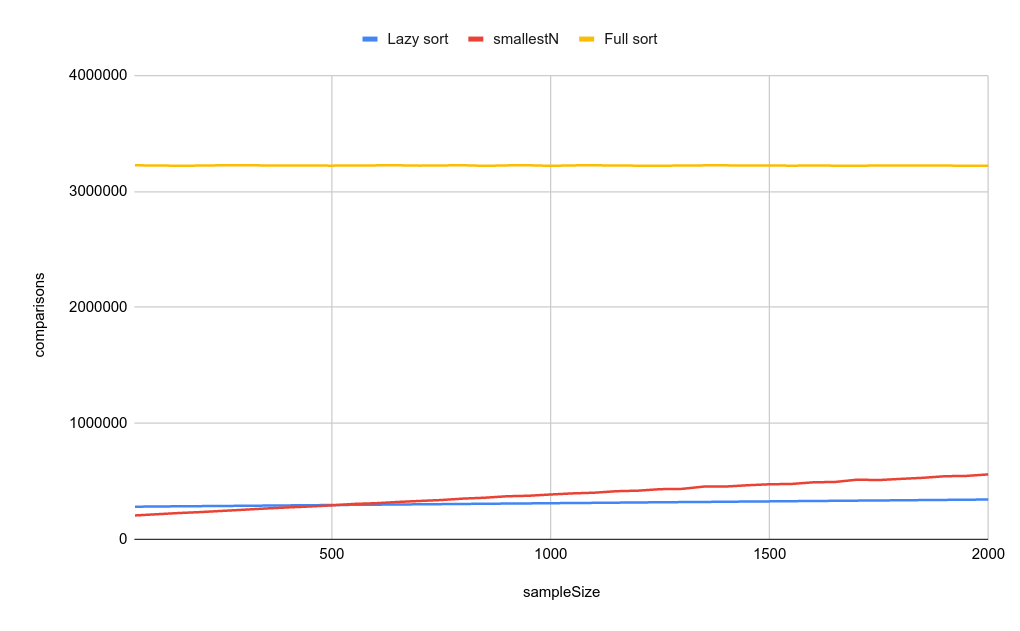 Clearly, both the lazy version as well as the “smart” version are able to avoid a large number of comparisons. Let’s remove the strict version so we can zoom in. 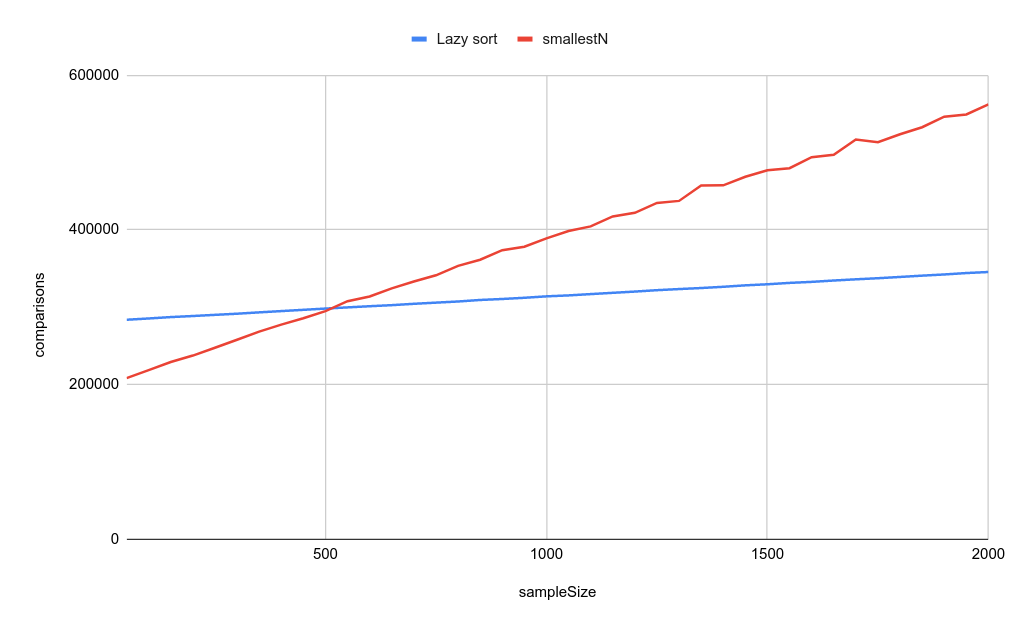 What does this mean?

Can we say something about the complexity?

Thanks to Huw Campbell for pointing out a bug in the implementation of smallestN_smart – this is now fixed in the code above.

Helper function: check if all elements in a list are equal.